Spring has made its home on our front porch this year. A pair of house finches chose the corner near our front door to make their nest. When they first started trying to build the nest, I didn’t think it would work out. There is quite a bit of traffic in and out of our door, so I was really surprised they decided to stick it out. It took them about a day to construct a scraggly little nest out of dried grass. I’m guessing they were amateurs because the nest kept falling apart on the side that was unsupported. My husband took a small scrap of wood and placed it under the weak side of the nest for support, figuring that the birds would probably give up at the sign of human intervention. But those little finches gladly accepted his help building the nest. 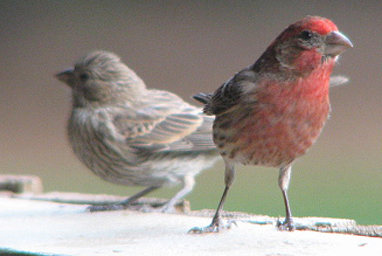 Since then, every time we open the door we hear the fluttering of wings as the birds scatter to escape our interruption. But for the last week or so, I’ve been surprised to see only the male bird flitting about.  I wondered what had become of our little mama. Apparently she had been very cozily tucked inside her nest tending three tiny eggs, undeterred by the coming and going of people. Yesterday we discovered three fragile little fuzzballs huddled together in their tattered home. I couldn’t believe how quickly it all happened. It was probably no more than two weeks ago that they began their nest-building and now there are three tiny new birds preparing to head out into the world.

Isn’t our life just like that? So much time spent frantically nest-building, coming and going, in pursuit of life. And then, for a few precious moments we get to nurture and grow these tiny people into adults who are ready to fly.

And sometimes I do feel like that little mama bird, tucked away in the nest, hidden from the rest of the world. It may seem like I’m missing out on all the flitting about, chirping and squawking and seed-hunting. But home is where the magic happens.

And the magic doesn’t last long.

Kendra is a stay-at-home homeschooling mother of four rowdy boys. Okay, three rowdy boys and one who is still sweet and cuddly. She’s been married to her high-school sweetheart for twelve years. When she’s not playing teacher, nurse, cook or housekeeper, she loves to read and write.