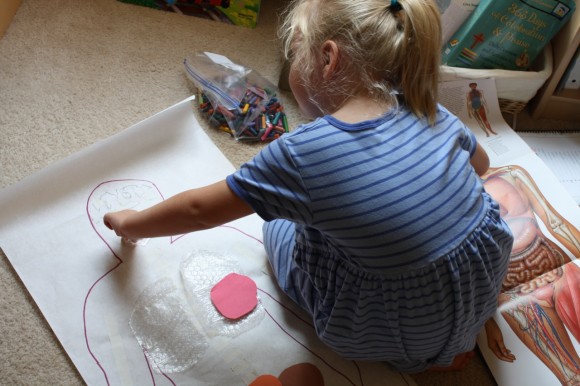 Four Science Projects to compliment our studies. As we started into working on each of these projects I suggested to the children that they not only pick something they were particularly interested in but also something that would help them dig deeper into something we were already studying.

Over the next week, here on Hodgepodge, each of the children will be sharing about their science fair/art/photo show entries. Today, with lots of help from kindergartener, I’m sharing about her project. 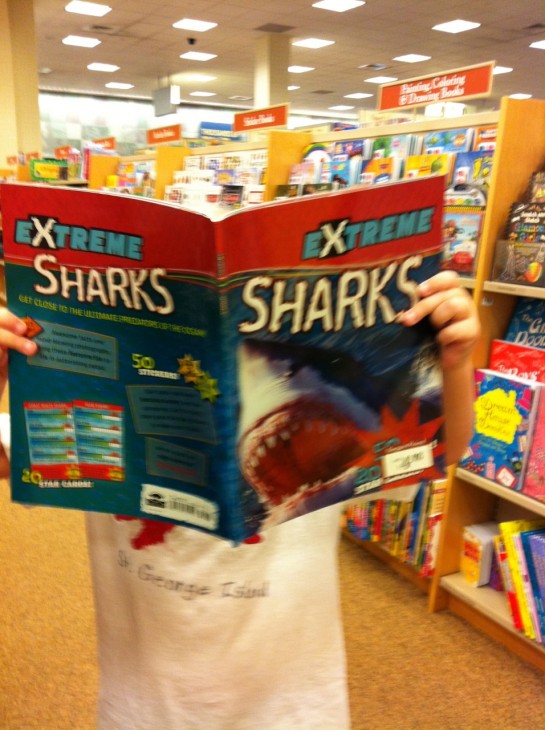 Question: How are Sharks and Humans Alike? Different? Since Kindergartener LOVES sharks, especially hammerhead sharks, she wanted to learn more about them. She remembered that in our science studies were are learning about the human body. So she came up with the question above. Well, over the summer Nana had seen on the Pink and Green Mama blog a life-sized diagram of the human body. This diagram was made by tracing the child’s body first. Then using household materials to make the bones, organs and more. This part of the science project took the most time but was also the most fun! 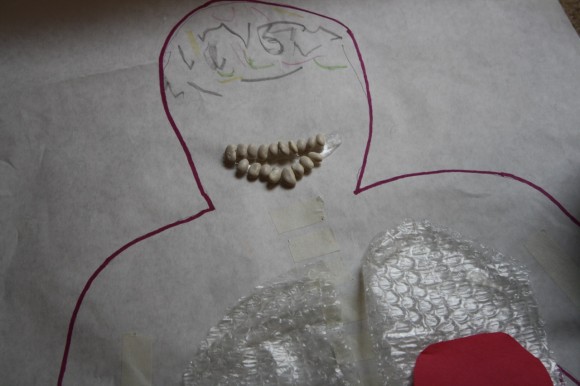 How can we make teeth? The noodles kept falling off so Kindergartener came up with navy beans! Next, she drew in her brain. 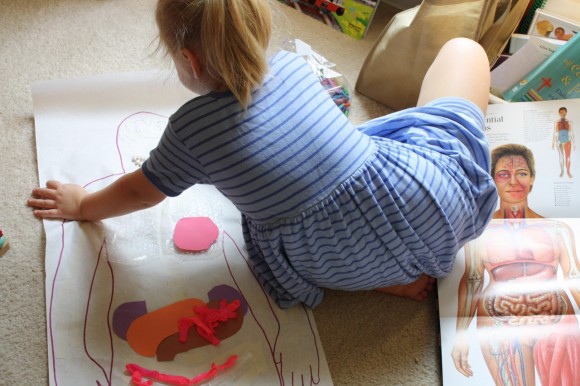 Q-tips for phalanges. Lots of glue! Added bubble wrap for lungs. Quite by accident she figured out to use pink balloons for intestines. Just because someone had dumped the whole bag of balloons out on the floor close by.  🙂

Another morning she drew the hammerhead shark diagram – on her own – by creating a shark with wooden blocks then tracing around it. She looked closely at a diagram of the inside of a shark’s body and added the internal organs. 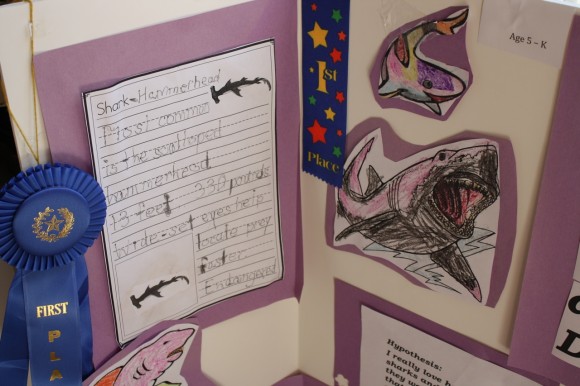 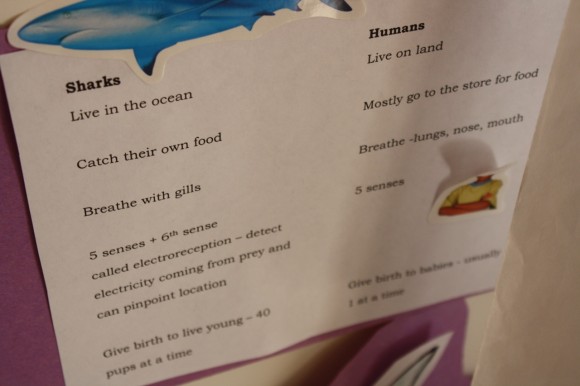 She dictated similarities and differences she knew between sharks and humans. I typed. 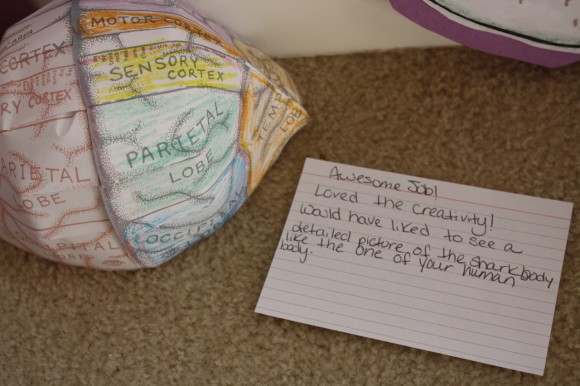 We printed and colored a brain ‘hat’ I found on Pinterest. (The judges added comments to each entry!) 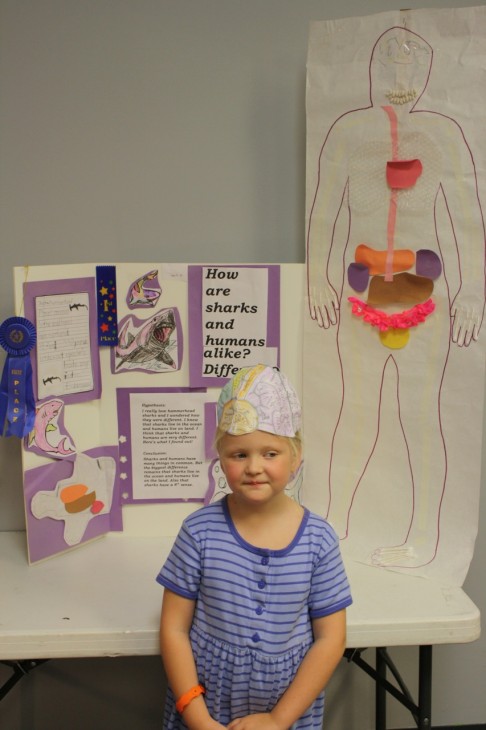 Fast forward to the day of the science fair. When we arrived, one of my friends told us that we might want to go see the results of the science fair first. So we went into the next room and discovered that she not only one first place for her age group… 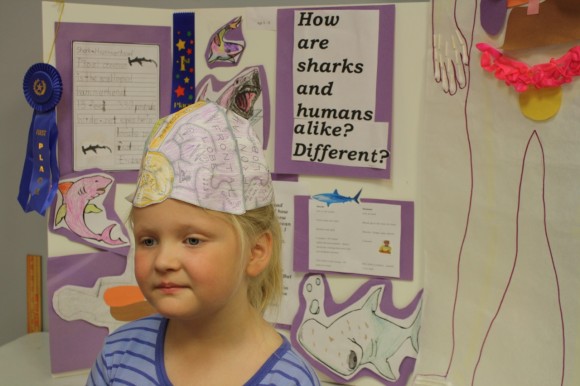 She also won the 1st place overall award for the entire science fair!! She did one of her famous surprised and pleased faces at that one! (which I missed getting a picture of). 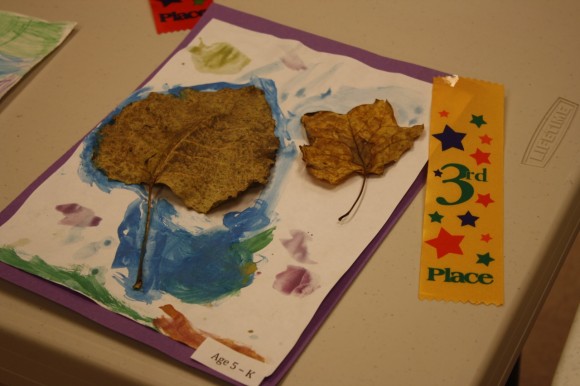 Coming up over the next week, the rest of the children will share about each of their projects and entries.