This past summer would have looked different only a few years ago. With the oldest married, the second born going away to college and two of the children being in high school this year it brings many changes around our home.

The first half of our summer was spent preparing for a wedding. The month leading up to the wedding we pretty much ate, and slept wedding details. At this point, I was wondering why the Lord saw fit to give me six girls and only two boys. I think I would much rather be on the boy planning side of a wedding.

I also became weary of having to utter the words, “Wait until after the wedding” to my other children who wanted to do things besides plan a wedding.  Then after the wedding, we spent the next week recovering and getting things back in order from the event. I still have things sitting around I don’t know what to do with.

On a side note, it was a wonderful day filled with lots of happiness and beautiful memories. 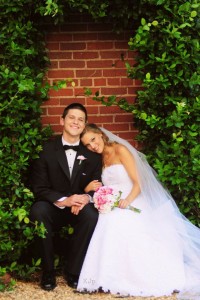 Now that the oldest is married and we had an extra bedroom in the house, the other children were eyeing to make good use of this new room. So, the painting and room swapping began. We had six children in the upstairs of our house all sharing one bathroom. This was not too terrible when the kids were little, but as they have gotten older, the two boys have not been a big fan of sharing the bathroom with four girls, two of which were in middle school.

So, I have spent a week moving the two middle girls downstairs into their now-married sister’s room.  I moved the two little girls into the middle girls’ old room and my younger boy into the little girls’ room. I then brought the married daughter’s stuff upstairs to the younger boy’s old room.  The younger boy’s bedroom was actually a bonus room, so it does not have a closet. He has been sharing a closet with his brother across the hall his whole life. He was quite excited to place his clothes in his very own closet. Who would have known someone could get so excited over a closet.  Now his old room is our guest bedroom, which works out very nicely. 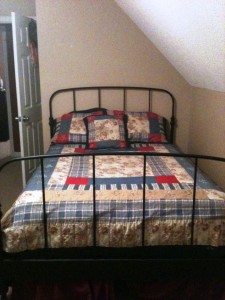 The younger boy’s old room is now the guest room, or my daughter and son-in-law’s room when they come home.

During this time, I have been getting ready to make the transition for six of my children to attend a small private school, and me taking on a resource teacher position. That means I was able to spend three days driving across Atlanta for a training workshop and many other days consignment shopping trying to find school uniforms for the kids. Six kids equal many uniforms.

The next few weeks hold lots of back-to-school shopping, cheerleading practice, football practice, a six-hour trip to see my oldest and her husband in their new home. It also involves dropping the second born off at her college that is six hours away in a different direction, and driving two hours to pick my older son up from a Summit Ministries camp.

Then the school year begins…and that I am sure will be a completely new world for us. Many changes around our house.

Well, that is about it for a summer in the life of a mom whose oldest just got married.