I can’t believe it is already time for my little guy to be eating solid foods, but ready or not, the time has come. I started making my own baby food with my first child 10 years ago. This is one of those subjects that usually raises eyebrows among my friends. Most people think I’m either “one of those health nuts” or Super Mom. Neither is true. I started making baby food with my first baby for one reason… money. I don’t even know how much a jar of baby food costs today, but I know it was expensive to me 10 years ago. Now I do it less because of the money (though that is still a factor) and more because I enjoy it and I know it is better for them.

So here is a little tutorial of what I do. It really isn’t scary. It isn’t all that much work. And at least for the next few months, I know he loves to eat what I cook! That is especially nice when I also have a four year old who has a very different opinion. 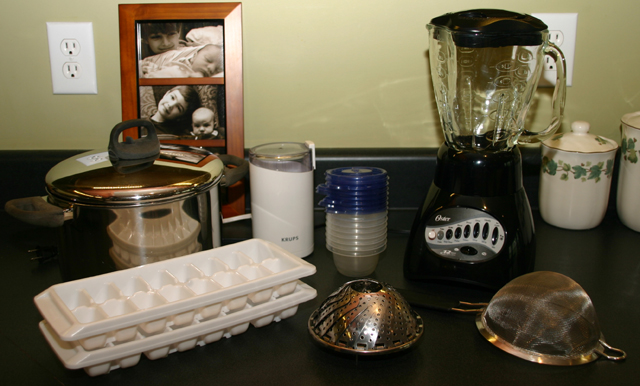 Okay, here you have pretty much everything I use, and a lot of it is optional. You have a pot for cooking fruits and veggies and in the center there is the steamer basket that sits in the pot. Then there is the blender. An immersion blender will also work for most foods. Then you have a strainer. The only food that I take the time to strain is peas. The white contraption in the back is a coffee/spice grinder that I use to grind rice into powder for making rice cereal. That one is new to me with this child. More on that later. Then you have ice cube trays and small plastic storage containers. With my first two kids I used ice cube trays exclusively. With the third I used only the containers. With this baby I’m using both and I think that is best. Also more on that in the next part. And the last bit of helpful equipment is the photo of my boys looking like angels in the background. Not necessary, but a nice touch.

For the first few weeks, I actually don’t use any of that equipment. We start with bananas and avocados, neither of which need to be cooked. Instead, they are mashed with my very favorite piece of equipment, the Annabel Karmel Masher & Bowl. You don’t need it until you’ve tried it, and then you can’t live without it. Boy I wish I had one of those with the first three babies! It mashes food perfectly in seconds. WAY better than the old fork in a bowl trick! Oh and by the way, so far his favorite food is bananas AND avocados, combined.

Once he’s ready to move on to something besides avocados and bananas, we need to start cooking. I usually buy in bulk whatever is on sale out of the list of first foods that I found here. It is a great resource for recipes and how to do just about anything that you might want to do with baby food. It even has instructions for making yogurt for babies. I’ll be trying that one next month. This month I bought pears, plums, carrots (organic because the price wasn’t much different), and peas. I actually found a bag of shelled fresh peas at Sam’s Club. Normally I would use frozen petite peas.

I put the strainer basket in the pot with enough water to come up to the bottom of the basket and bring it to a boil. Meanwhile I start washing and preparing the fruits and veggies. Carrots go in the pot, unpeeled, and cook until they are soft. Then I run them through the blender and pour them into the ice cube trays and put them in the freezer. The pears I peel and core and cook in the steamer basket, and repeat the blending and pouring and freezing. The plums are pitted but not peeled because the skins come off easier after they are cooked and they help make the plums a pretty plum color. The peas are the most difficult because they need to be strained. I steam them until they are soft, run them through the blender for 4-5 minutes, then strain. The straining took 10 minutes or so. If anything is too thick for the blender, just add some of the cooking liquid until it purees nicely. Everything goes into ice cube trays in the freezer and then into labeled storage bags. To serve them, I just pull out 2-3 cubes and microwave them in a bowl just until melted, but not hot.

So what about the freezer containers? I like to use them for table foods. If I make a big batch of spaghetti, puree some leftovers and freeze individual baby portions in the containers. I recently did this with a big batch of minestrone soup. He won’t be eating it for a few months, but down the road I’ll have a good supply of ready-to-go meals. I prefer the ice cubes for individual fruits and veggies because it saves freezer space and it makes it possible to do fun combinations of foods on a whim. How about carrots and pears today? Or carrots and peas? Or pears and plums? You get the idea.

Oh, and I was going to mention the baby rice. That baby food website I referenced earlier also has a whole section on how to make baby rice cereal. They really have whole sections that answer just about any question you could have about making baby food. WAY more informative than this little blog post. Definitely check it out. But back to the rice. You basically grind rice (brown rice is preferred) in a spice grinder until you have a powder. Then you cook the powder much like you would cook grits, or cream of wheat for those of you not from the South. I cook enough to last a few days and store it in the fridge. Then I just scoop out what I need and reheat it in a bowl. And you know what? It actually tastes like rice. 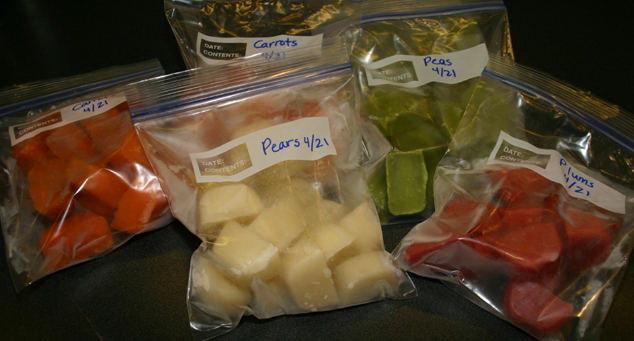 Kendra is a stay-at-home homeschooling mother of four rowdy boys. Okay, three rowdy boys and one who is still sweet and cuddly. She’s been married to her high-school sweetheart for twelve years. When she’s not playing teacher, nurse, cook or housekeeper, she loves to read and write.