Home » Blog » The Habit of Giving Thanks

Anyone who has ever opened the pages of a Bible knows that God wants us to be thankful in all circumstances. The Bible is full of references that instruct us to be thankful. One of the more popular verses that comes to mind is from Philippians.

Be anxious for nothing, but in everything by prayer and supplication, with thanksgiving, let your requests be made known to God. 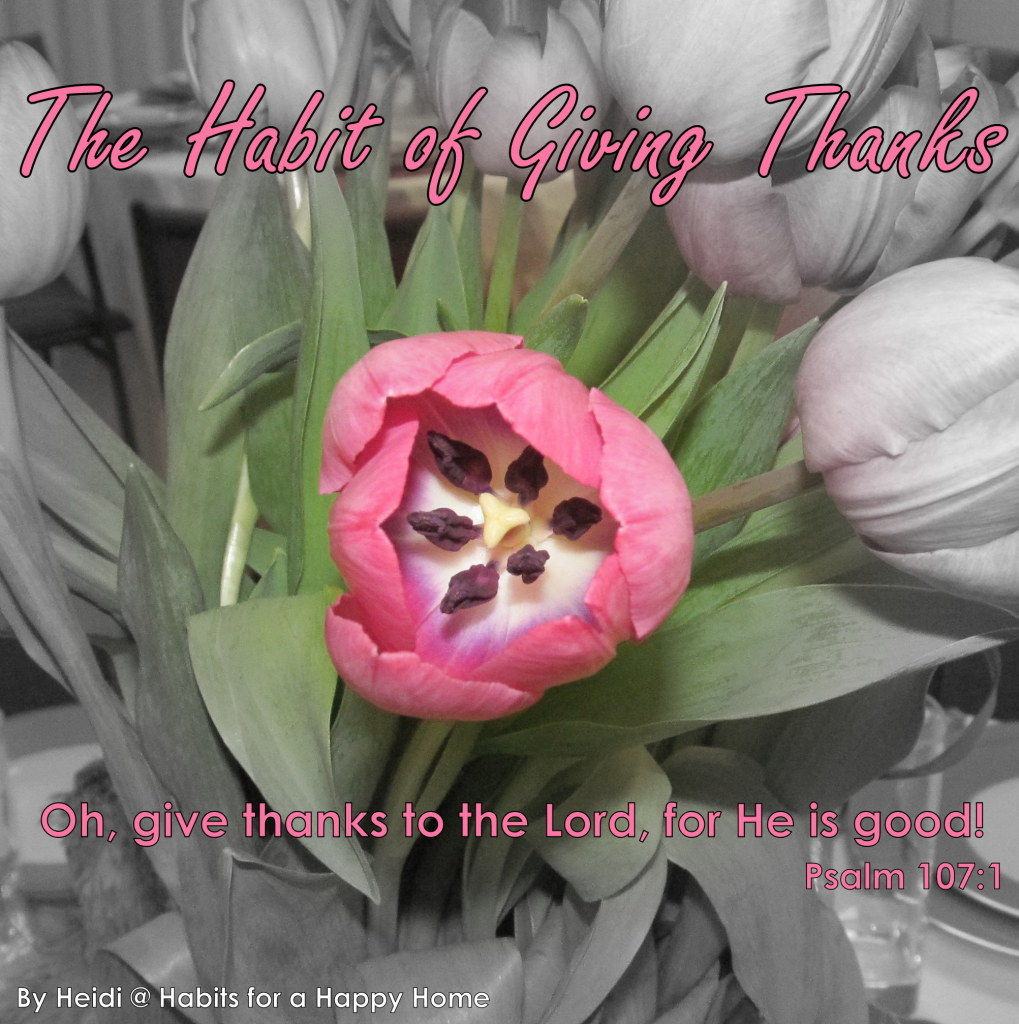 So, we know we are supposed to be thankful, but how do we show gratitude? I want to share with you the example that Jesus gives us about how to show our gratitude.  Jesus made a habit of expressing His gratitude and we should follow His example in our lives.

Jesus offered thanks to God for His life and death

In Matthew 11:25, Jesus thanked God that the Truth about the Messiah had been revealed to His followers.

During the Lord’s Supper, Jesus knew He was headed for the cross, yet He still gave thanks to God. Maybe He wanted to set an example for His disciples. Maybe He knew the sacrifice that was about to be made for us. Or maybe it was because His work was almost finished. No matter how you see His gratefulness to the Father, He gave thanks.

And as they were eating, Jesus took bread, blessed and broke it, and gave it to them and said, “Take, eat; this is My body.” Then He took the cup, and when He had given thanks He gave it to them, and they all drank from it. And he said to them, “This is My blood of the new covenant, which is shed for many.”

Jesus is disappointed when we do not give thanks.

In Luke 17 we learn about ten lepers that Jesus healed. Only one of them returned to thank Jesus and praise God for healing. Jesus’ response was, “Were there not ten cleansed? But where are the other nine?”  The other nine men were probably grateful for what Jesus had done, but they did not make the effort to go back and show their appreciation. Jesus’ disappointment in that is clear in this passage.

Jesus gave thanks to the Father

In a very familiar story from Matthew Chapter 14, Jesus says grace, thanking God for His provision, in front of a vast crowd. “And He took the five loaves and the two fish, and looking up to heaven, He blessed and broke and gave the loaves to the disciples.” In what seemed like a simple dinner blessing over a couple of fish and some loaves of bread, turned into a miracle that was witnessed by thousands.

In John Chapter 11, Jesus raises Lazarus from the dead saying, “Father, I thank You that You have heard Me. And I know that You always hear me, but because of the people who are standing by…”. This is another example of Jesus giving thanks to God. His prayer was not a petition to God, but thanksgiving to Him.

Jesus recognized the deeds of others and showed his appreciation publicly.

In Mark 12:41-44, Jesus acknowledges the value of the poor woman’s gift and does not hesitate to express his thanks. To the world, what she gave was very little, but Jesus recognized the true value of what she gave and He showed His appreciation.

In John 12:3-8, Jesus shows His appreciation for the spikenard oil that Mary anointed Him with. When Judas Iscariot questioned the gift, Jesus said, “Let her alone; she has kept this for the day of My burial.”

In everything give thanks; for this is the will of God in Christ Jesus for you.

These are just a few of Jesus’ examples of how to express our thankfulness to God and to others. During this holiday season, I encourage you to examine whether you  are following Jesus’ example of gratitude.

We should give thanks to Jesus so we do not disappoint Him.

We should give thanks to the Father.

We should give thanks to others.

What are you thankful for this holiday season?